Yaya ( 夜々, Yaya ? ) is one of the main characters in this series and named for her indestructibility. She is a Banned doll, meaning she is a puppet who has human components. She has real human blood and skin. The series suggests that Yaya is a machine doll in actuality. However, it is unknown just how complete she is at the moment. Yaya, like Sigmund, must also consume food to maintain her body functions. Raishin indentured himself to Shouko to become her puppeteer. She has two sister puppets Irori and Komurasaki.

Yaya has mostly cordial relations with Charlotte, although is still somewhat more adversarial with Frey due to distress from  that her bust is much more petite than Frey's. And she is afraid this may cause Raishin to be attracted to her.

Yaya favors speaking in a third-person perspective, both for comical effect and to potentially show her awareness that she is a doll and not a human.

She really loves Rashin, as seen in the First Chapter where she chants words into his ear to love her and marry her and every time an attractive woman gets close to him she starts to get moody and depressed. She sometimes also gets certain situations wrong, especially if they involve Raishin being with another woman. Raishin, meanwhile, cares for Yaya, too,[1] as shown when he saves her from a fatal blow after thinking about another puppet that got killed.[2] Yaya loves Raishin so much that she would go to the ends of Earth for him. Yaya wishes to become human so that she can marry Rashin and have many children with him.[3]

Yaya and her two sister puppets are  Shouko's creations, or in other words, Shouko could be considered their mother. It is claimed by Shouko on the first encounter between her and Raishin that Yaya "is the best automaton" in the world.[4]

Yaya is a lovely high school age girl of Japanese heritage who wears  a very short kimono style dress has dark hair that is very shiny , a slender petite figure, reddish eyes and a pale complexion. On her's left side hip, she has a tattoo that identifies her as "Yaya of the moon".[4] She is seen in different types of clothing and at one point a nurse's outfit, tending to Raishin. In some panels of the manga she has a purplish cast to her hair(see photos in gallery on this page).

In the Prologue, she is seen with a sword, which has not been seen since.

Strength is only limited to amount of magic Yaya can draw from Raishin. In the first chapter she stops a runaway steam engine, which shows off her raw strength and how durable and impervious to damage she is, although her shoes were worse for wear. Yaya's flawless strength is invincible, according to Shoko.

Impervious, Yaya is near invulnerable when she hardens her skin and body to the hardness of carbide, able to maintain control all of her body's hardness even if it is severed or leaked out as blood. However, Cherubim's projectile shards are diamond hard and can wound her even when she is in her hardened state. 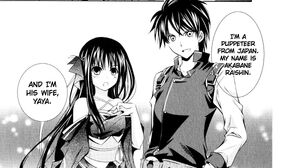 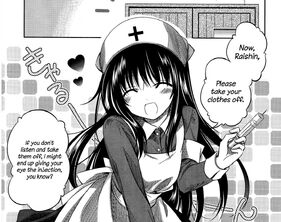 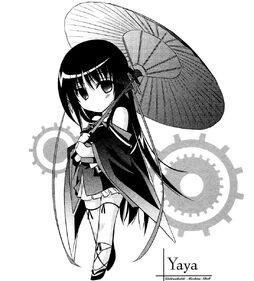 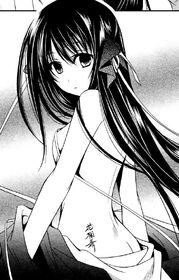 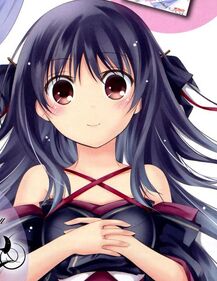 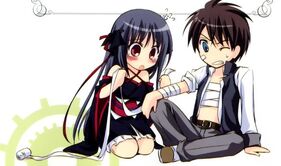 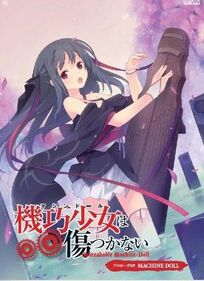 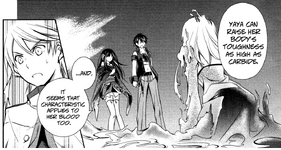 Add a photo to this gallery
Retrieved from "https://unbreakablemachinedoll.fandom.com/wiki/Yaya?oldid=6833"
Community content is available under CC-BY-SA unless otherwise noted.